Has Apple Lost Its Core? 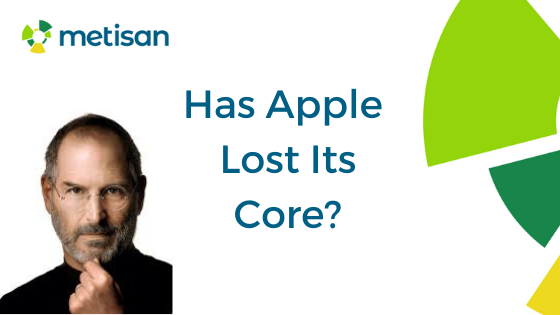 In 1997 Steve Jobs was back at Apple. He went back to basics with what Apple stood for, what they believed in, and where they fitted in the world.

Here is what Steve Jobs said:

"Our customers want to know who is Apple and what do we stand for? Where do we fit in this world?"

"Apple at its core:  We believe that people with passion can change the world for the better."

I have been watching the latest ads from Apple and I am positive Steve is rolling his eyes in heaven. Honestly, it could have been a Samsung ad. It was all about the product. The brand and what they stand for has gone MIA. All the core of the creativity; the possibility and dare I say it, the passion …. gone!

I open the official website for the iPhone 12 and the first thing it says … is nothing about being crazy and cool. Welcome to 5G!

Apple site: 5G speed.1 A14 Bionic, the fastest chip in a smartphone.

A company with innovation at its core.

When Jobs rejoined Apple in 1997 (having left in 1985), he took a company from the brink of bankruptcy to one of the biggest brands in the world. How did he do this? By focusing on new ideas that had little to do with his competition. He used his insights and intuition to guide the company to release products that others followed. Jobs was a visionary leader because he had a knack for understanding what people wanted before they knew it themselves.

The brand was his focus. So, as well as innovative marketing and products, he also took charge of the Apple in-store experience, creating new Apple stores, and driving how people were looked after. Elevating the experience of purchasing Apple.

If you think about why an Apple store is ALWAYS busier than other retail outlets … it is because people can go in and play, tinker, and get a real feel for the products and the services. In an Apple store, they have thought about how people touch / see / hear / taste / smell and feel in their experience. This focus makes it more memorable and differentiated.

Give customers an amazing experience, something that is special and memorable. All of this is centred around the customer … not the product or the service. Steve Jobs won because he made these things secondary to the customer experience.

Having spent 17 years in the IT world, ask any IT boffin and most will agree that Apple has never had the best anything. It didn’t try to compete on product features. So why is it doing that now?

One of Job’s keys to success was that he was very focused on the user experience. Indeed, Apple didn’t create products for the benefit of the product. They were always geared to the user. So, do users really want speed and display improvements? Maybe, but I'm pretty sure that isn’t their burning desire!

I have been an Apple user for many years. But I have to say that with the iPhone X, I was a little annoyed that I had to now hold it only one way to make it work. In the past, the screen had flipped whichever way you changed it. Maybe I am just a whinger. But this is less intuitive and more asking the person to learn how to use the product the “right way”.

When Jobs died in 2011 there was only one iPhone on the market at any one time. This made everything to do with customers easier. The support, the sales, and the marketing. It was simple. With the release of the iPhone 12, there are currently four models.

People are not that tech-savvy. And so, keeping it simple makes life easier. Apple has never been seen as a tech company… so why now are we seeing a proliferation of models and focus on the product rather than on the customer and what the Apple brand stands for?

Has Apple lost its Core?

One of the hallmarks of Apple’s success has been its ability to keep and stay ahead in the marketplace. Not with technology but by deeply understanding who their customers were. They used these insights to create products that were simple, elegant, and fashionable.

Perhaps I am getting too old to be at the centre of the Apple target market. But I don’t need a phone with all the features of the Apple 12. It doesn’t wow me – it is predictable.

The new Apple focus on product doesn't inspire me to strive, to be different and to change the world. They have lost their core!

So will Apple survive post Jobs, or are they careering towards another demise, as they did when Jobs left the first time? This time, he can’t come back.

Here is the video of Steve Jobs